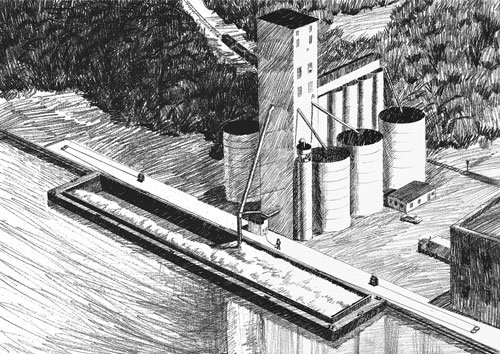 NABRICO’s all electric constant tension positioning winch system consists of two winches, two variable speed drives, variable speed motors, failsafe brakes, and PLC (programmable logic controls). These components have been engineered to allow one winch to be in a drive mode, pulling, while the other winch is in a torque mode, holding. When the object being positioned is at rest, both drives are in the torque mode, and the load holds its position on the dock, letting out cable during loading, and taking in cable during unloading. This also allows cable in and out as required during tide movement. The amount of torque/pull and speed on the cable is controlled by two potentiometers mounted on the control panel. The positioning winch system is capable of maintaining the full horsepower load at zero speed indefinitely. If there should be a loss of power or the emergency stop is pressed, the failsafe brakes hold the load.

NABRICO has utilized proven winch designs with the latest drive and touch screen technology. Adjustable ramps have been programmed into the system to minimize the shock on the cable and associated hardware that is a result of starting and stopping. For additional information, drawings, and specifications contact NABRICO.

NABRICO pioneered the positioning winch system. In addition to the standard model, the system is available in a larger 50 horsepower model and in a smaller 10 horsepower model. Using various motor and gearbox combinations, the line pull and speed can be changed, since the basic engineering in the panel and winch remain the same. The positioning winch has industrial, marine, and rail applications. The winch can produce full horsepower load at zero speed indefinitely. If there should be a loss of power or the emergency stop is pressed, the failsafe brakes hold the load.